A crowd admires the Ringling Brothers, Barnum and Bailey Circus elephants near Green Bay, ca. 1950. Elephants have had a long history as part of traveling entertainment in the United States. The first recorded instance of an elephant in the United States was in New York City, where it was exhibited on a street corner on April 23, 1796. During the next forty years, elephants were displayed in various circuses and "menageries" throughout the United States, often as a side show requiring a ticket of 25 - 50 cents.

In 1852 Lewis B. Lent, the proprietor of the New York circus, became a partner and manager of P. T. Barnum's American Museum and Menagerie. He began to use the elephants as an advertisement for the show, placing the animals at the front of parades and outside the tents. This tactic continued to be used by P.T. Barnum in 1871 when his circus debuted. By the 1950s, elephant rides, parades, and other free events became a standard element that has continued to attract modern circuses audiences.

Photo #18.1988.1851.
The Henry Lefebvre Collection of the Neville Public Museum of Brown County 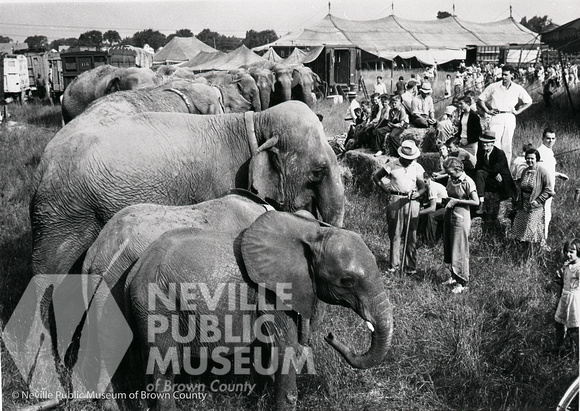