Coaching UW-Stevens Point from the sidelines in this January 1978 photograph is Dick Bennett. The Pointers were playing against UW-GB Phoenix at the Arena, a game which the Phoenix won 62-39. Six years later Bennett came to UW-Green Bay as head coach of the Phoenix and led the team to its first three appearances in the NCAA tournament in the early 1990s. He went on to coach Badger basketball at Madison from 1995 to 2001.

Photo #UWGB vs Stevens Point,1/5/1978f17
The Press-Gazette Collection of the Neville Public Museum of Brown County. 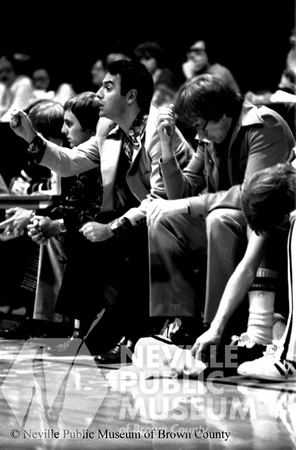