A crowd gathers after a water tank collapses a portion of the Main Street Bridge, October 14, 1913. Green Bay's bridges all began as wood drawbridges with enough room for two lanes of horse-drawn traffic and a pedestrian walk on both sides. The Walnut Street Bridge was the first to be built during the late 1860s and then was followed by the Mason and Main Street bridges in 1874. All of the wooden bridges continually fell victim to rot, insects, fire, wind-driven ice, and the occasional misguided cargo ship. This led to the reinforcement and replacement of many parts of the spans with iron beams between 1881 -1885.

Unfortunately, these reinforcements did not appreciably reduce the damage, and the Mason and Walnut Street bridges were finally replaced early in the 20th Century. For various reasons the Main Street Bridge's replacement was postponed, leading to a partial collapse in 1913. It was only after a second collapse in 1922, that the city finally chose to replace the structure. In 1924, the new Main Street Bridge was completed and became a noted landmark until its subsequent replacement in 1998. 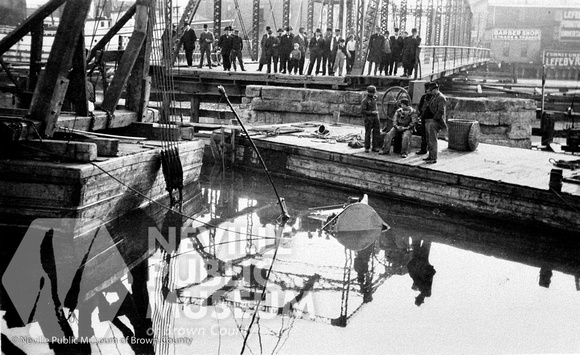