Interurban Street Car number 109 stalls, caught in a large snow drift near the 1000 block of Velp Avenue, February 22 - 23, 1922. During February 1922, a heavy blizzard stopped Green Bay city services for several days, including the interurban cars. According to local legend, interurban street car operator, John Gilsdorf, caught vehicle 109 in a ten foot drift that covered much of Velp Avenue. After trying to free the car, he removed the control levers, tore off one of the window shades, wrapped the cash-box in it, and hid it under a seat. After securing the car, he walked back into Green Bay on foot. When he returned to the car several days later, it was filled with snow as if the doors and windows had been left open.

Photo # 6209.74B.
The Otto Stiller Collection of the Neville Public Museum of Brown County 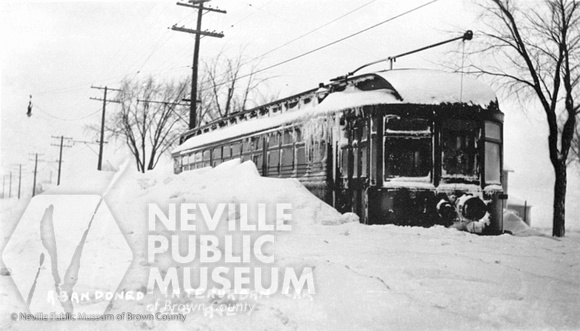