"The importance of insects in the environment is critical. They perform essential roles as decomposers, pollinators, and as food for other animals. There are over 900,000 currently known species of insects, with many more to be discovered. This is 75% of the world’s known animal species on land, freshwater, and saltwater. This work reflects the question of "What is happening to our environment"? This piece was inspired by an article in the New York Times Magazine, titled “The Insect Apocalypse is Here; what does it mean for the rest of life on Earth?” (November 27, 2018). It was also influenced by a visit to the Richter Collection at the University of Wisconsin, Green Bay. While perusing the collections of insects, often presented in cigar boxes, I was amazed at the variety of species found locally. I started to think about what would happen with the loss of many of these species, imagining a world with only flies. "
© Joyce Fritz 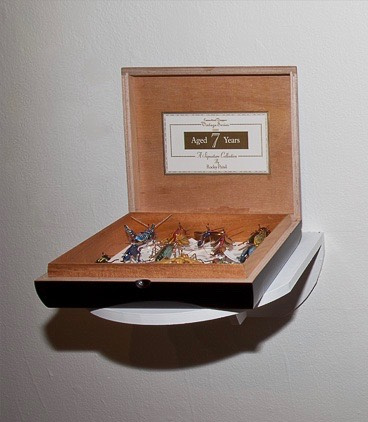